Sant Joan is the biggest, wildest and craziest party in Barcelona. It celebrates what is called the Summer Solstice in England, the shortest night/longest day of the year. This is a pagan festival that was celebrated for hundreds of years and even though the Christian Church tried to put a stop to it nowadays the tradition is alive again. It is one of the most important celebrations in Catalonia.

There is a certain pastry that people eat on the night of Sant Joan, called ‘coca’. It’s a big flat cake and you can have it either with fruit or with pine seeds on top. The shops were full of them and I simply had to try it! 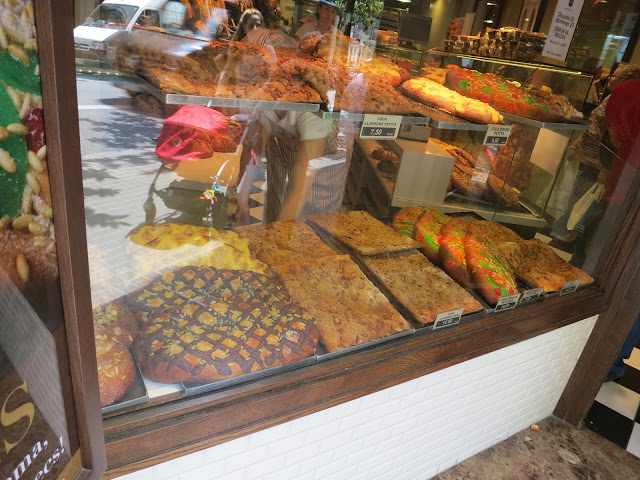 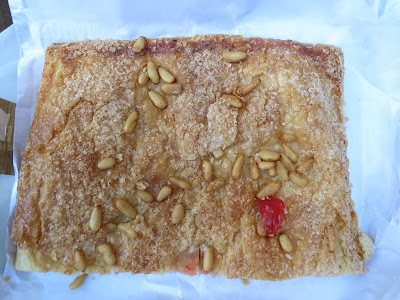 The Catalans also call this festival the ‘Night of fire’ as it is all about fire and fireworks. There is no central firework show in the city but people just buy their own form the many stalls set up for this reason throughout the city. 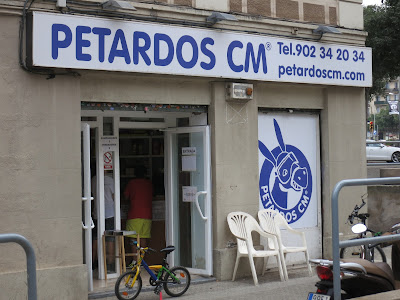 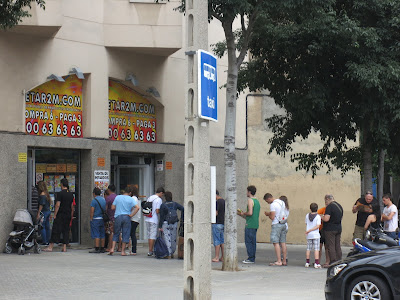 On the evening of the festival you could see many people like this couple: one holds a bag full of the Coca of Sant Joan, and the other’s bag is full of firework. 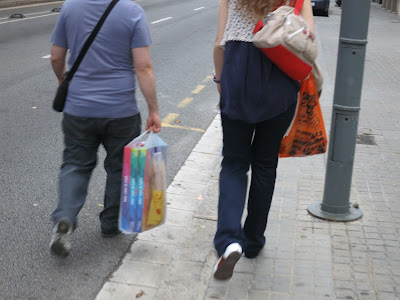 After all this you can imagine how much I have been looking forward to the evening. Paul wasn’t around so it was all down to me to fully experience the event. To make sure I’m in the thick of it I wanted to ask all the expats about the best place to see it. When I asked the question on the ‘Hungarians in Barcelona’ Facebook site I was very surprised to see the two replies I got: ‘Everywhere but here’ and ‘there’s a nuclear bunker about 42km out of the city, that’s the most optimal.’ They both got lots of likes from others. You can imagine how puzzled I was. Then I asked a friend I know from school to come with me to the beach because apparently that’s where everything goes crazy. He flatly refused saying it’s too dangerous, he’s not going there and I shouldn’t either.

I really didn’t understand what’s going on but I decided that I would believe him so I gave up on that idea. We decided to go up on the side of Tibidabo mountain to watch the fireworks but it looked like it was going to rain in the evening so in the end we decided to stay in Grácia and wander around the streets.

From a few days before I could hear a firecrackers here and there but during the afternoon it became relentless. I walked to Grácia from my house to see what was happening on the street. Wow. I understood everything and I was suddenly very happy that I didn’t go to the beach. Firecrackers were banging everywhere, kids setting off fireworks in every corner while you can hear the ambulance wailing constantly in the background.

These kids are wearing the Catalan separatist flags and one of them carried a torch. They were running through the streets, they only stopped here because of the red light. (I mean a real torch with real fire in a kid’s hand who was just over 10 years old and running around the streets with it!!)Not sure what was the significance of it all. 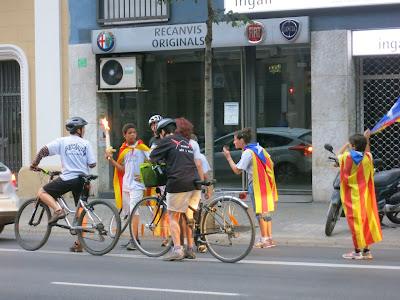 I got to Grácia safe and sound. We wondered around for a while then we heard drums. We followed the drummers to a little square. On the way we found this little gathering. The neighbours set up tables, brought food and drinks and were celebrating together. 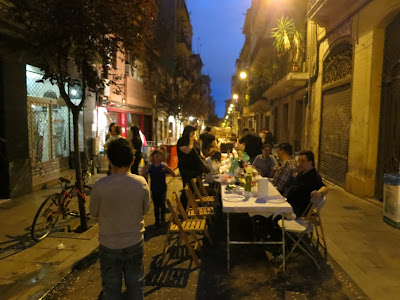 We finally got to the square where all hell broke loose. The drummers made this huge bonfire, there was food and wine served and everybody, I mean literally everybody set off fireworks and the kids were running around under the fireworks waving sparklers around. We were standing next to the wall trying to be far away from all the bits that can fall us from the fireworks. 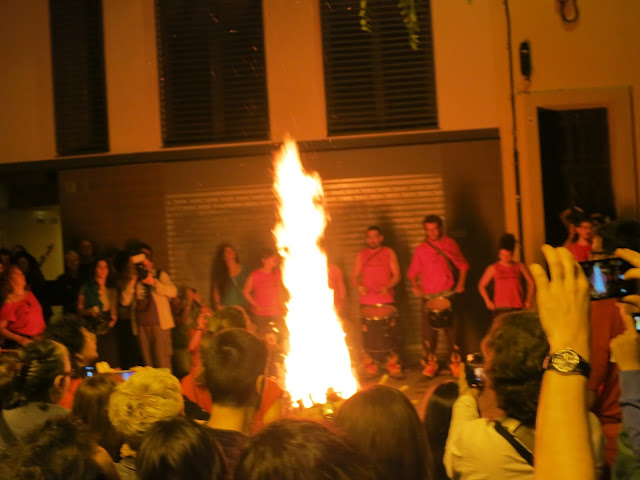 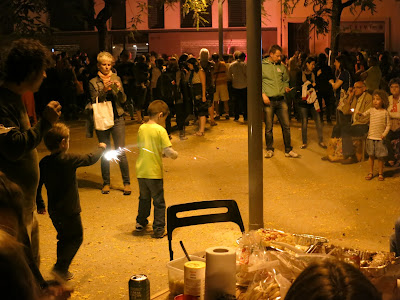 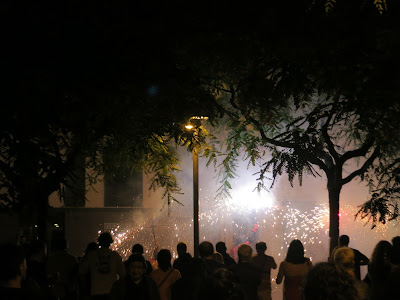 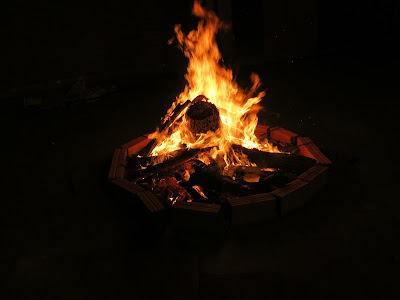 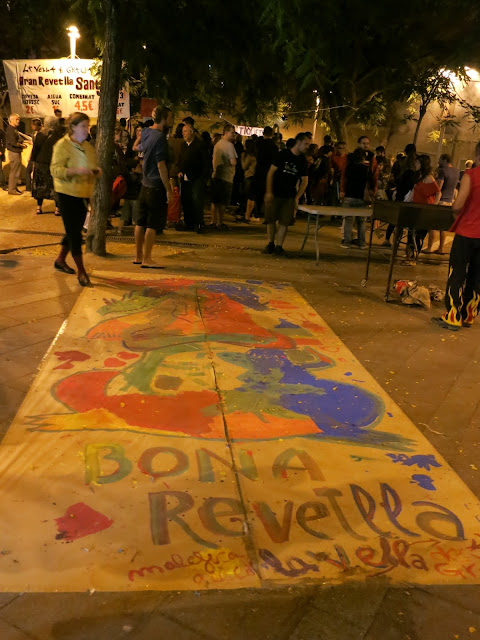 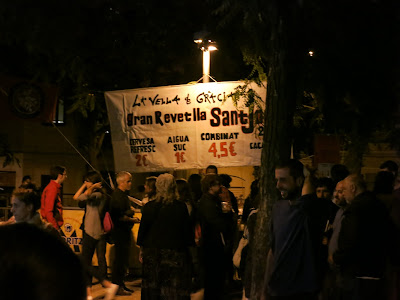 This is a (very bad) photo of an 8 year old (he seemed to be) who is setting off a firework while his parents proudly watch him from the side. The firework ended up in the tree above and everybody had to run. 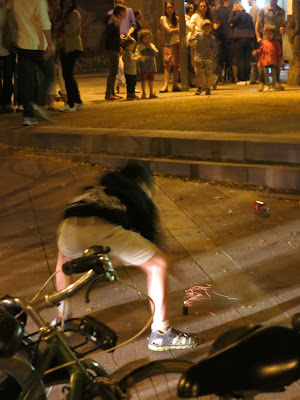 We wandered over to another square where a live band was playing and kids were dancing, even though it was after midnight. This was a bit more civilized so we stayed here for a while. 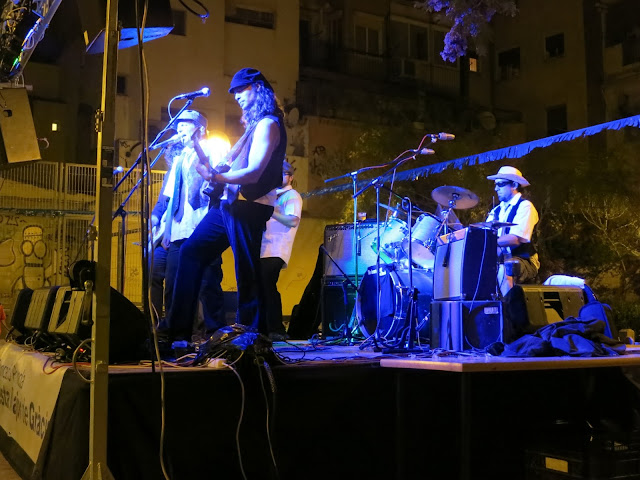 All throughout the night the firecrackers were going on in the background, one louder than the other. I just couldn’t understand! By the time I got home it was 2.30 in the morning and they were still setting them off! Luckily I was too tired and fell asleep despite the deafening noise.

The next day was a public holiday in most places. It was a holiday for the street cleaners for sure. I went for a walk and the city was full of the remnants of the fireworks/firecrackers. 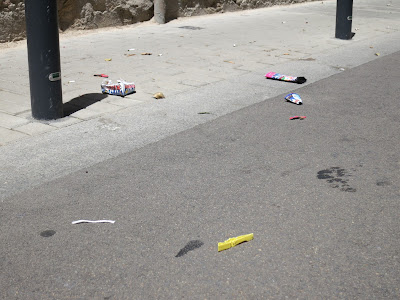 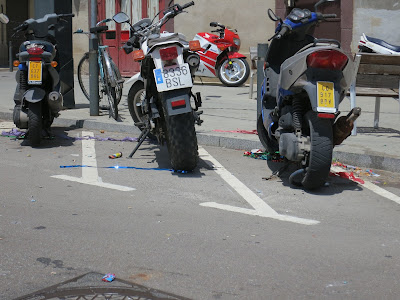 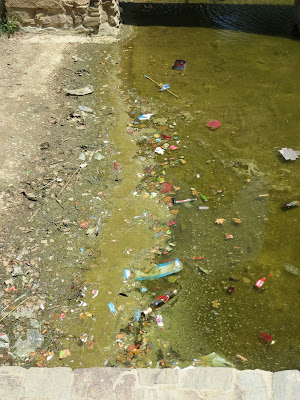 I think Sant Joan is not my favourite festival. I might just be too old for this.
Posted by Unknown at 19:29