How to make a Spanish tortilla

It is quite shameful but it took us more than half a year to have a go with this simple but delicious meal. As always when it comes to cooking we asked our Spanish friends to help us out. All the four of us had something important to do. This time Juan Carlos gave up the wooden spoon and the apron and focused on the preparation of the drinks (that are almost as important as the meal itself), Meritxell took over our tiny kitchen and expertly prepared the lunch and explained the steps, I was busy switching between noting everything faithfully in my notebook and taking expert photos of every action and Paul… well, Paul was busy supervising everybody and everything.

Finding the ingredients was surprisingly difficult as there are only tiny supermarkets in the Albayzín but we managed to get everything over three days and a little last minute shopping. Here are the things we had to gather for a tortilla for four people:
-          1 big onion
-          4 BIGGER sized potatoes (Meritxell was insistent on the ‘bigger’)
-          8 eggs
-          300ml olive oil
-          Salt
These were the given measures but at the end we completely changed everything. One word of warning: make sure that you use a pan that hasn’t been scratched so when you turn the tortilla it doesn’t stuck to it.

1.      Start with the most boring thing in the world: peel the potatoes. 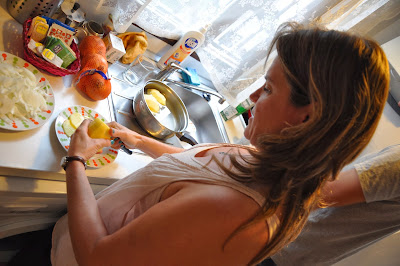 The Spanish follow two different schools at this step:
-          You can cut them up into slices (this is what Meritxell favours, too) 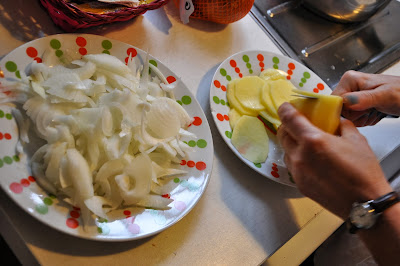 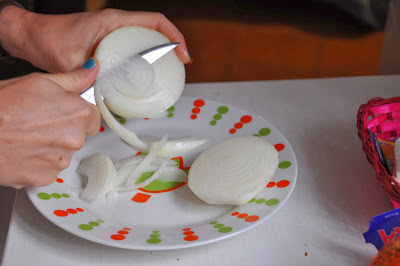 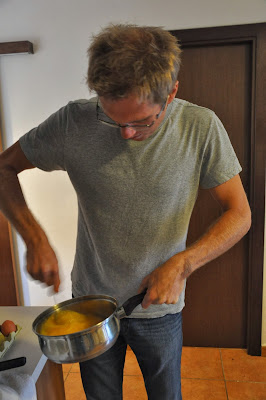 5.      Cook the first batch of potatoes in a sea of oil (it looked more like an ocean for us) but don’t cook them too much, just so that they are not hard but not brown. 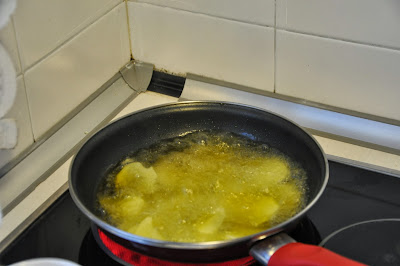 6.      Put them straight into the already beaten eggs. Add some salt.
(Some people like to mix the salt with the onions.) 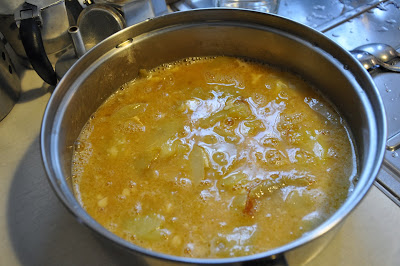 7.      Cook the second batch of potatoes, this time for a bit longer.

8.      After the potatoes come the sliced onion batch into the oil. 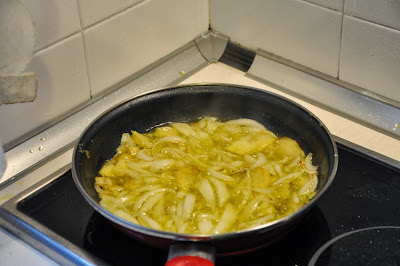 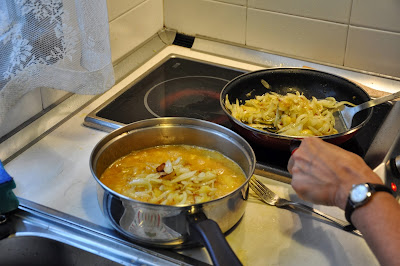 10.      Take the remaining pieces of the onion out of the oil and pour most of it out.

11.  When you pour the egg-onion-potato mixture in the pan the oil has to be hot but then turn the gas/fire/electricity down so that the egg can cook thoroughly without burning. 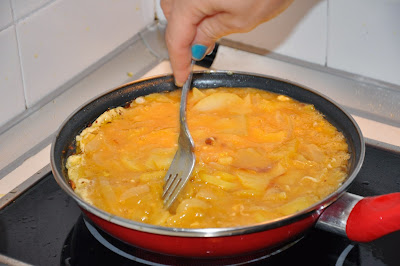 12.  Use a wooden spoon to take the sludge off the side of the pan so it doesn’t burn.

13.  When the egg is halfway done comes
THE CRUCIAL MOMENT!!
Turn the tortilla. 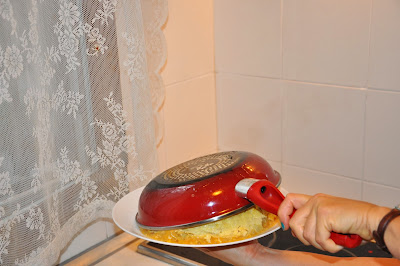 14.  We were really lucky as we were given a ‘tortilla overturner device’ from our guests but you can use a lid as well that is bigger than the pan for this difficult manouver. Turn the fire up then down again. 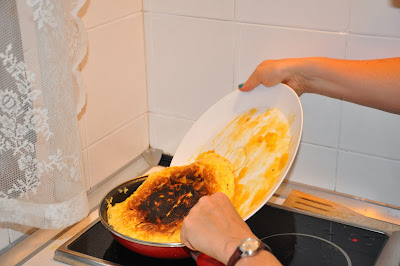 15.  Push the whole thing back in the pan and shape it with the wooden spoon. 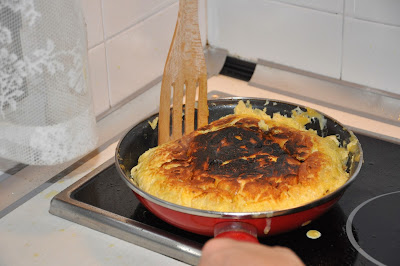 16.  If needed, turn the tortilla again.

17.  Turn off the gas and leave the tortilla in the pan for a bit longer to soften in the residual warmth. 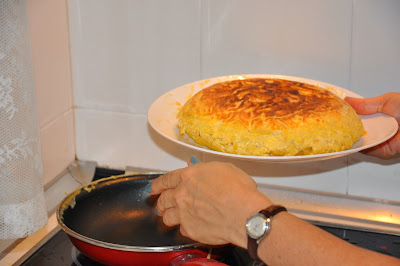 And that’s it, it’s done! They say the sign that it is perfectly done is that the middle big is still a bit soft.
You can serve it hot or cold, it’s delicious either way. Tried and tested and it got the Edit&Paul seal of approval both ways.

And what happened after? 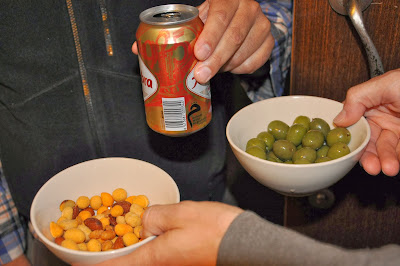 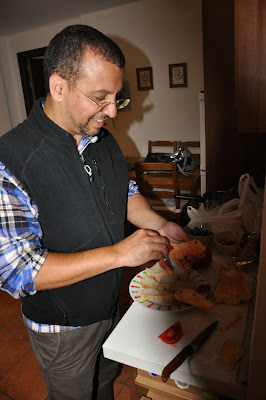 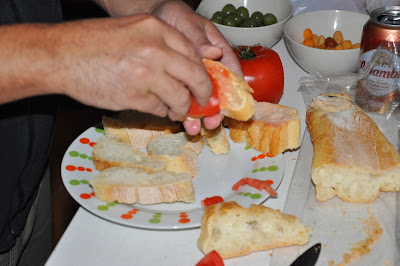 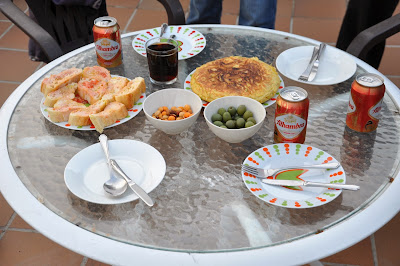 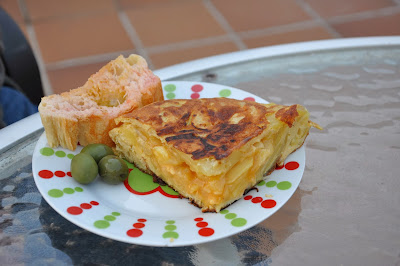 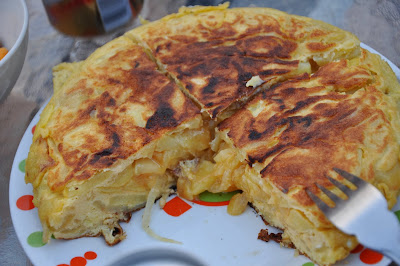 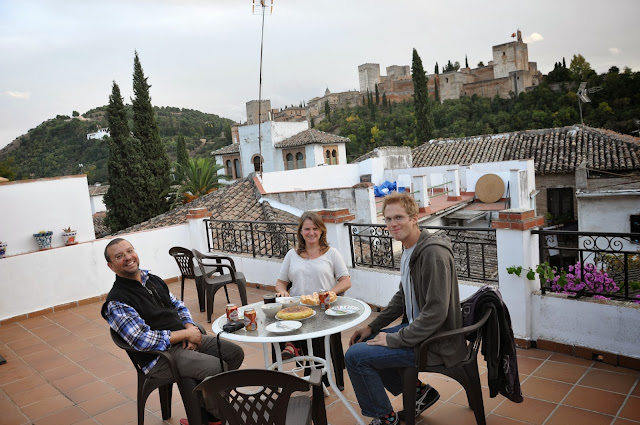 You can pimp it up by adding vegetables such as aubergines, pepper, spinach, peas etc. but keep it vegetarian otherwise it won’t be original! or something like that).

I’ll quickly add an interesting story. Do you know Ferran Adriá, the chef of the famous El Bulli restaurant? If the rumors can be believed this is the tortilla that he came up with:
1.: get a bag of chips. Open.
2.: Break the eggs straight in the bag.
3. Shake it up well.
4. Pour it into the pan and cook it like a normal tortilla.
5. Eat. 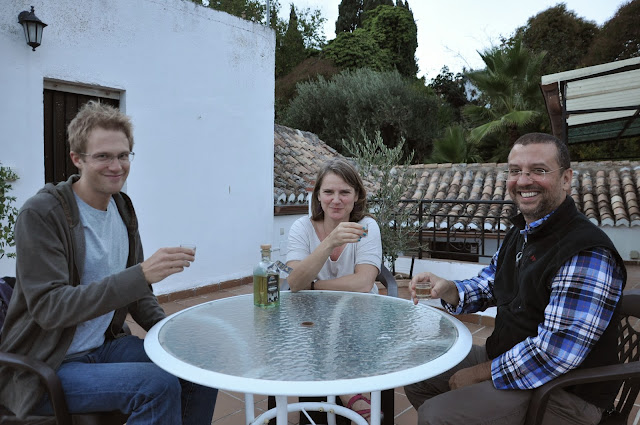