The first royal palace I’ve seen one was in Vienna, the Schonbrunn Castle, where at the time the court ladies had to wear those dresses that are very wide from the front and they had to turn sideways to get through doors. The second one was Buckingham Palace in London where the visitor feels almost intimidated by the array of wealth on display in every single room. I don’t think they could possibly put up another priceless painting on the walls or place another little intricately worked golden spoon into the cabinets, they are so full! I was intrigued by the Palacio Real as I didn’t know much about it. 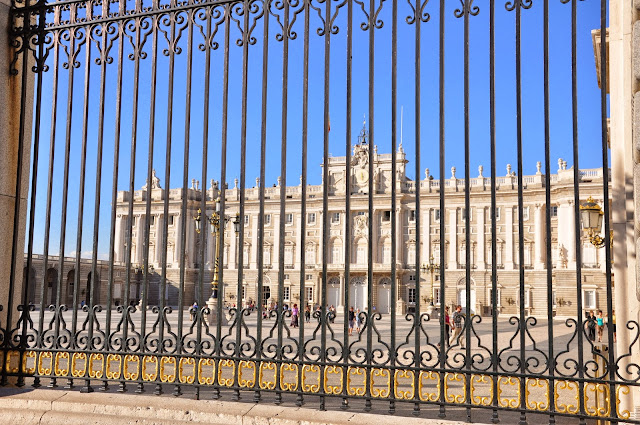 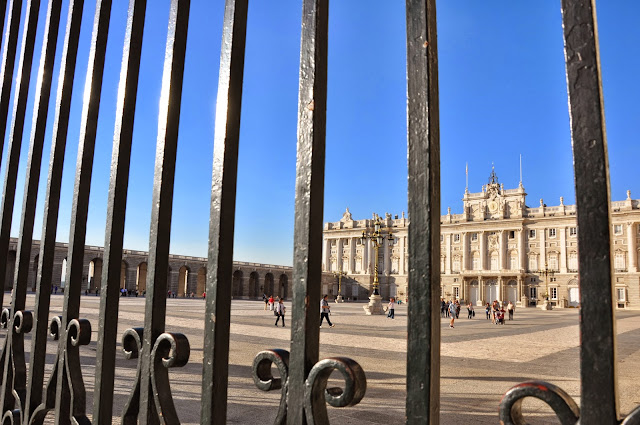 The palace used to be a fortress during Muslim times that was in a very good position, therefore you can imagine how Felipe V was rubbing his hands together in anticipation when the fortress burned down! He didn’t waste any time but ordered his new palace to be built right on the same spot! He looked at the Versailles in France and decided that he wants a bigger, better, more beautiful house than that! Well, they certainly managed the ‘big’ part, it’s HUGE, and it’s the biggest royal palace in the whole of Europe! Apparently it was too big for the kings themselves as they kept complaining that the food got cold by the time it got to their table from the kitchen. It has 2800 rooms and from these about 50 can be visited together with the Royal Armoury and the Royal Pharmacy. 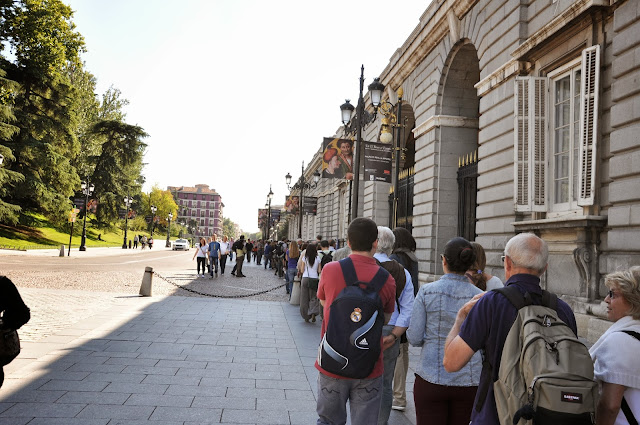 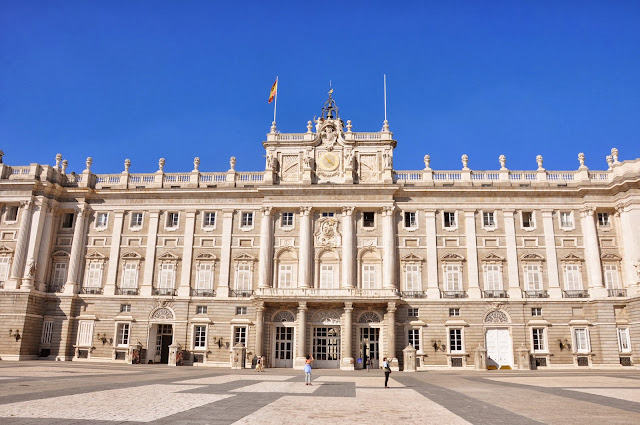 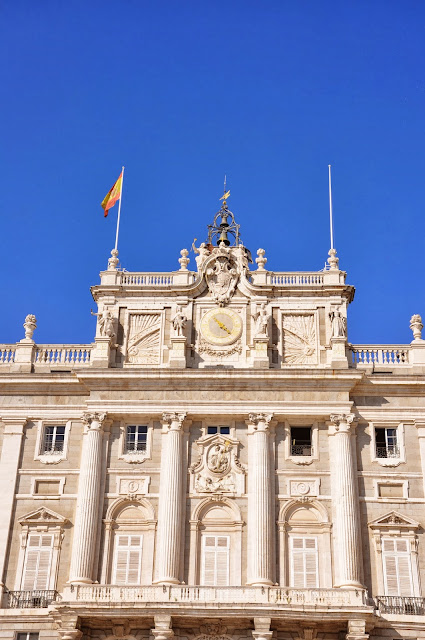 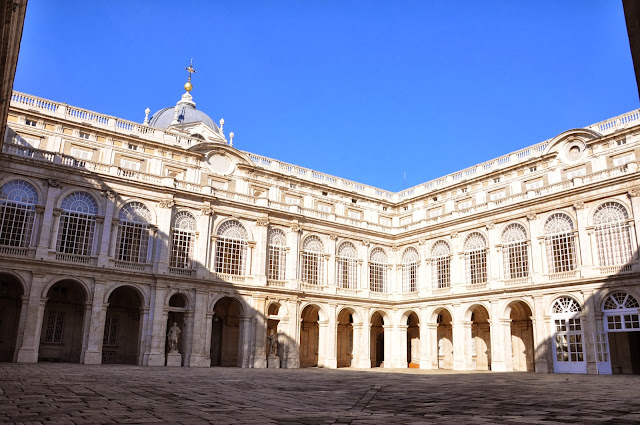 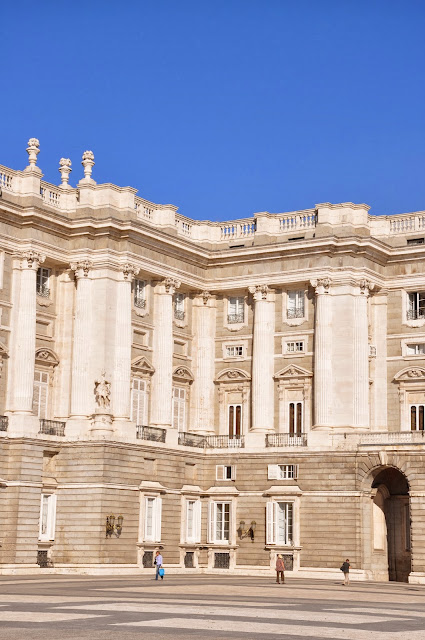 In Spain many of the monuments, museums and important buildings that usually cost a lot of money to enter can be visited for free at certain times of the week for European citizens (bless them!). I looked up the times and one afternoon walked over armed with my passport and my camera. The queue in front of the palace was intimidating but went quickly and in half an hour I was in, only then to be told that I cannot use my camera inside the building. Doh! 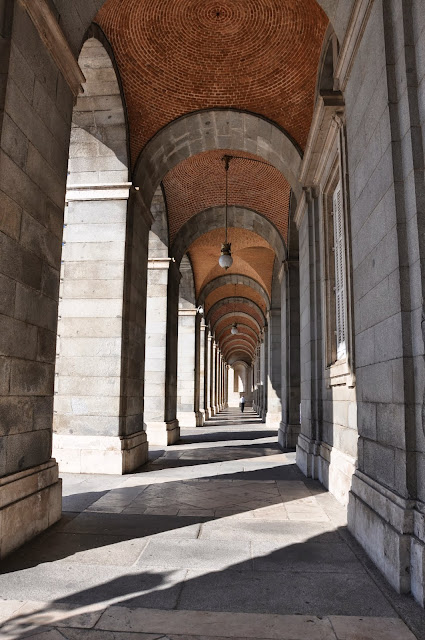 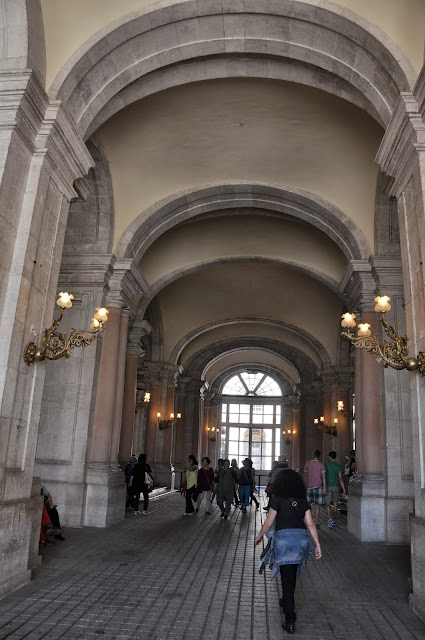 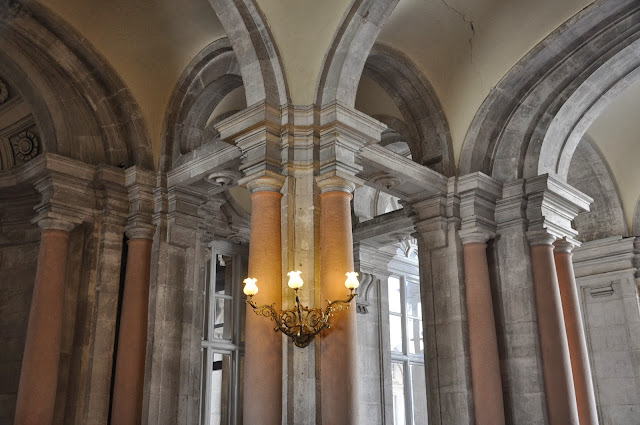 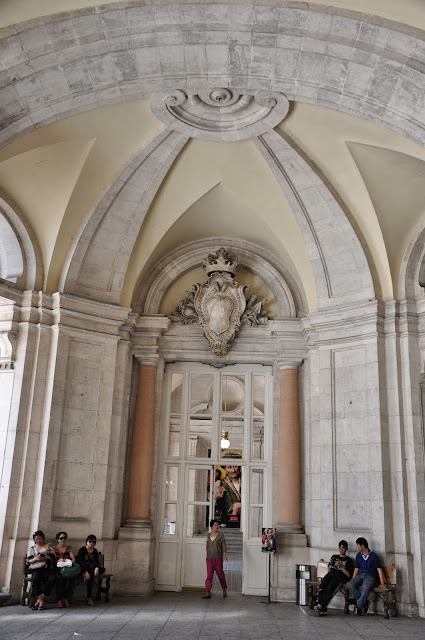 The rooms we were allowed to see were all lavishly decorated, almost all the ceilings were covered by vault frescos by famous Spanish painters such as Goya or Velazquez and the walls were covered with damask lining or with great, old tapestries that must had taken years to make. Every single piece of furniture was a beauty to look at, but you kind of expect this from a royal palace. 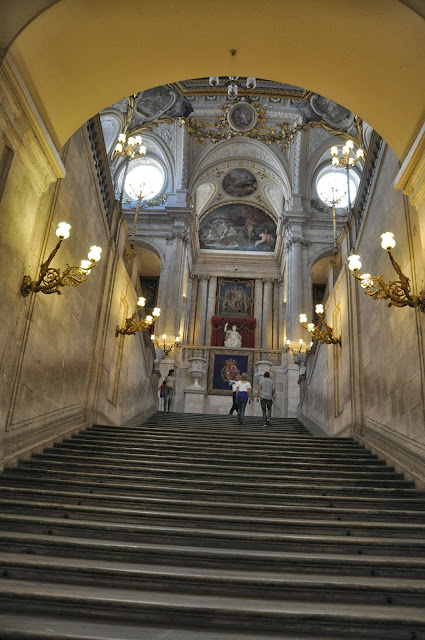 I would give ‘special mention’ to three of the many rooms we were taken around in.
The first one was the dressing room of Carlos III. This room is decorated in a ‘chinoiserie style’ that according to the little sign in English, was all the ‘rage’ at the time. Here are some pictures of the room.

The second one was the Porcelain Room where every single thing was made of porcelain, including the walls and the ceiling, made by the Royal Porcelain Factory. This is the smallest but also the most stunning room in the Palace. Take a look here.

The last one was the ‘Museo de Música’, the Museum of Music. I saw a few string instruments in vitrines and when I casually glanced at the sign on the bottom I saw that these were made by Stradivarius! I couldn´t believe my eyes! I had to walk through the room again, spending longer time in front of every instrument to have a better look. Here is the ´Spanish Quartet´ that consists of four string instruments, two violins, a viola and a cello. Obviously I couldn´t see any difference between these and the normal ones but they say that when these four instruments are played together they sound like a whole string orchestra!

After the Royal Salons I went to see the Armoury. It is pretty amazing, there are twelve knights set up in the room on horses covered in different kinds of armours, the animals included! Quite a sight! On the left side of the room there are the armours of one king (one of the Carloses) and on the right side another king (one of the Felipes). Unfortunately there weren´t any explanations here in English (there are extensive ones in Spanish) so I can only assume that all these armours were to be worn at different times in different ceremonies, otherwise why would one king own more than 10 sets of armours? It also has a downstairs bit with other interesting things such as whole sets of armours for children and their ponies.

It was quite funny to watch the couples walking through the Armoury. The men seemed to be interested to learn all about the armours and read all the information provided while the wives looked decidedly bored and kept checking themselves in the reflections of the display cases.

I walked into the Royal Pharmacy as well. There are many sets of pharmaceutical jars, some made of glass, some of wood, some of porcelain, most of them of artistic quality. I especially liked the little suitcases that contained tiny bottles of travel sets. There was a room that was arranged as a reproduction of a distillery of the time. 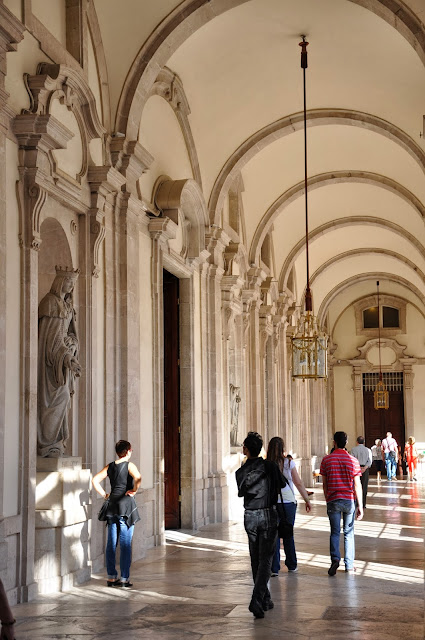 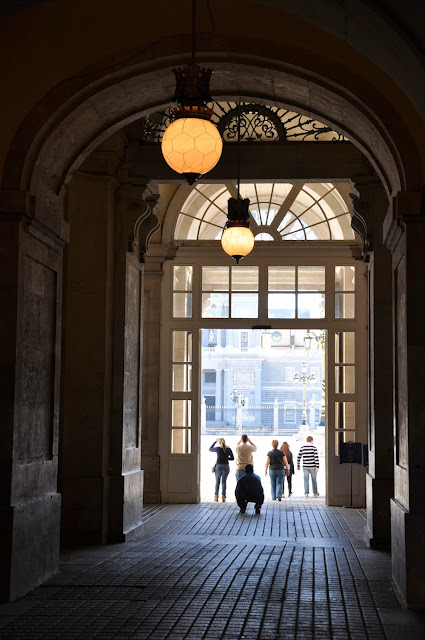 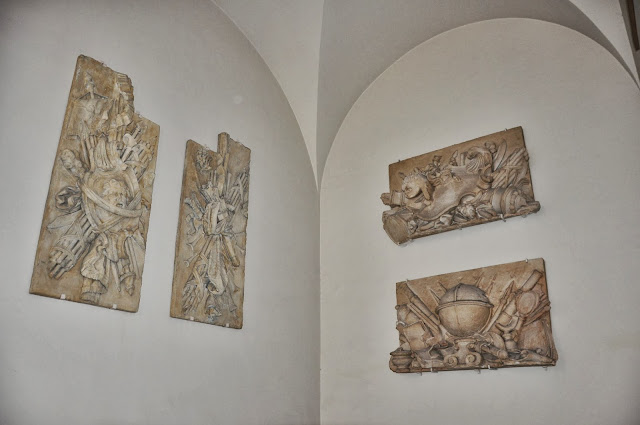 The current royal family does not live here, they live in a somewhat less conspicuous palace in the outskirts of Madrid so there’s no chance of spotting them. It’s still worth coming to see the building, if for nothing else then for the ‘Spanish Quartet’. Check this website for the opening hours and the free entry visits here. 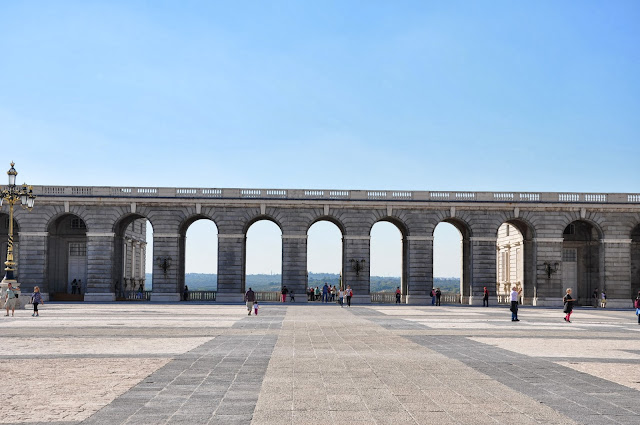 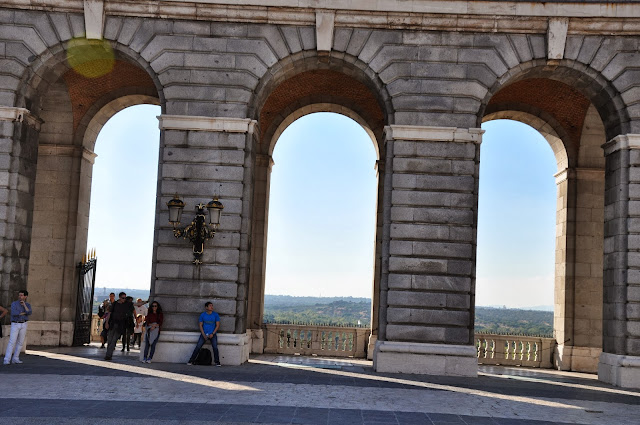 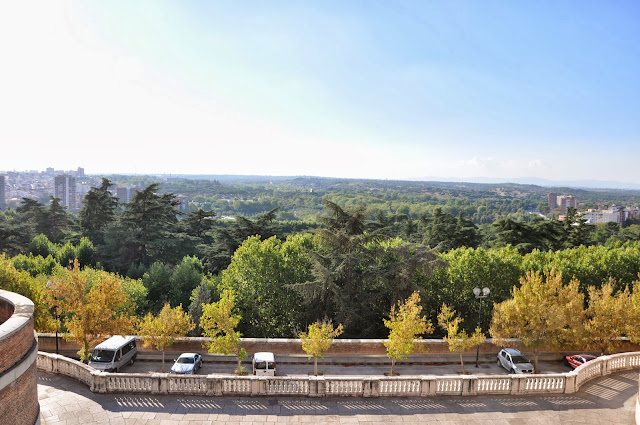 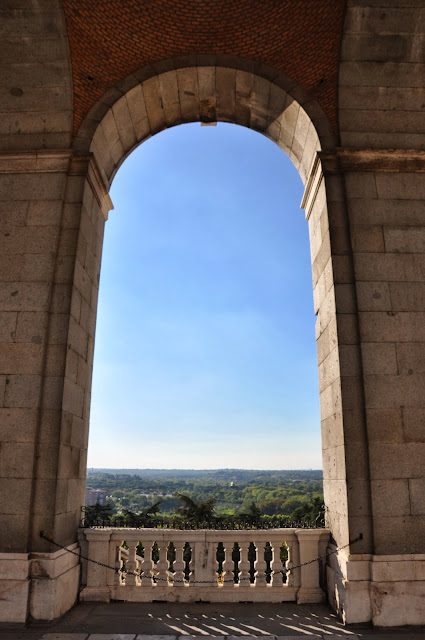